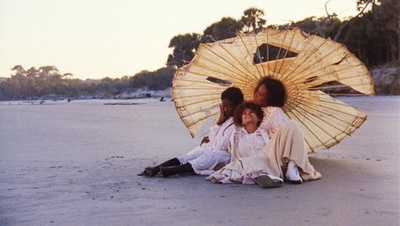 Women in Film #5 Slavery, memory, healing: DAUGHTERS OF THE DUST

Crisis Mirror has seized the opportunity to transform the ground floor of Folkets Hus in an open cinema room. Every other Tuesday evening we will dive into the bottomless archives of world cinema and bring a new movie to the surface. All the films will concern women to differing degrees: we will take on a trans-historical, trans-national, trans-cultural and sometimes just transgender look at how cinema shapes women, and how women have shaped cinema.

The event will be reoccurring (every second Tuesday on even weeks) and the movies of interest will be announced shortly. All movies will be screened with english subtitles.

1902. The Peazant family is living through a time of painful change as they face the decision to leave their home and embark on a migration journey to the mainland US.

The Gullah people, to which the Peazant family belongs, has lived for centuries, and throughout the time of slavery, on the Sea Islands off the coast of South-Eastern United States. Therefore, due to its isolation with respect to mainland America, Gullah culture has retained a higher degree of vicinity to that of their ancestors that were deported from West Africa, a fact that is evident in the creole language spoken by its people.

For the Peazants, the decision to migrate is not taken up without conflict between family members of opposing worldviews and creeds, as the question arises of what is it that they are leaving behind, and what is it that they are about to embrace: traditionalism against progressivism, nativism against assimilation, folk religion against Christianity. Not even 50 years after the end of slavery, its unresolved memory still haunts the community, demanding that issues of healing and remembrance be raised by its people.

The spirit of a yet unborn Peazant daughter steers the story’s course, which drifts from one woman family member to another, melding their past and present, their soul and their memory, their traumas and their hopes. Poetic images take shape among the lush nature of the coastal environment, and are then swiftly swept away by the blow of sorrowful emotions.

Julie Dash came out from the first generation of African American radical filmmakers that studied at the UCLA Film School, known as the L.A. Rebellion. She directed "Daughters of the Dust" alongside artist Arthur Jafa, her then-husband, who served as cinematographer and producer.

Free entrance for the screening!
Cash for the bar!
We hope to see you there!