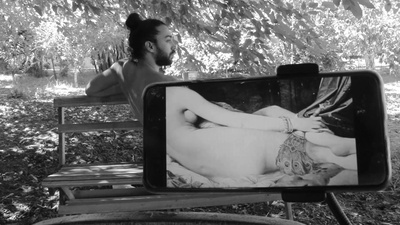 A beautifully intimate program of nine short documentaries is produced and curated by the Tunisian Mawjoudin Queer Film Festival – an annual film festival celebrating the LGBT+ community. The program is a collaboration between Mawjoudin and Doc House and seeks to examine gender, sexuality and non-normative identities in the Tunisian context. This program offers a unique insight into current conversations and upcoming cinematic talents.
Line-up:
Butterfly, with no doubt
Voices go through the city. A city that pushes them to the margins. A walking body carrying these voices.The space which is other. Filled with their palpable dissonances.
Director: Nedjam Zeghidi
15 min
Chrysalide
This documentary is a train ride, meetings with individuals questioning gender and non-normative sexualities.
Director: Anissa Troudi
8 min
Manwella
Two names, two faces, and one story. A story that is told behind the eyes of a person who is looking to be free but not lonely.
Director: Sahar El Euchi
10 min
Nidhal
Between real and animation, the story of Nidhal is told. A young Tunisian homosexual, defending individual liberties in Tunisia through his work at a radio station. He finds himself under pressure and threats that oblige him to flee the country and demand asylum in the Netherlands.
Director: Bassem Ben Brahim
10 min
Non-binary
North African Tunisian Queers are explaining the meaning of their gender identity and how they are dealing with their gender expression in a patriarchal queerphobic system and an intolerant society.
Firas Ben Ali
8 min
Thick Skin
To define yourself is to shut yourself away. Ahmed, a young Tunisian artist, transcends standards and goes beyond the labels that are stuck on him, with a single goal: to live as his soul tells him to do.
Director: Inés Arsi
6 min
Palimpseste
A name is a spell and a key. If you know how to read... Through a linguistic adventure, the director explores the several layers of Identity hidden between the lines of his first name.
Director: Mohamed Osman Kilani
6 min
Contraste
When the artist talks about gender and cultural policies in connection with the Queer cause. Between laws and legality... what role does the intellectual and particularly the artist in theater and cinema play in questioning the social aspects of the cause.
Director: Jasser Bechir Queslati
6 min
LoveandViolence
What link is there between the image and the sound? How can love bring out as much hate? In Tunisia, violence against the LGBTQIA+ communities is normalized and accepted by society. LoveandViolence, tells the stories of five individual victims of violence because of their sexuality through audio and through the images, the love stories of four couples.
Director: Amel Guellaty
12 min