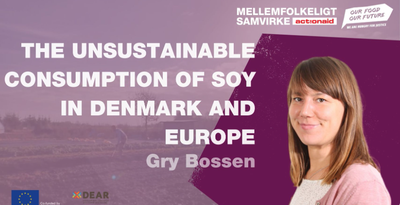 facebook.com (which tracks you)

A talk given by Gry Bossen about the socio-ecological harms of soy production, and how soy is consumed in Denmark and the EU.
This talk is part of the Soy Series Project at Our Food Our Future Denmark.

-----
Soy production in Latin America is characterized by a number of social injustices, like land grabbing and displacement of indigenous peoples, and ecological harms, like the deforestation of the Amazon rainforest and consequent biodiversity loss.
The EU’s consumption of soy, particularly for animal feed (75%), perpetuates and exacerbates these harmful practices by industrial farmers in Latin America. And with a growing population and increased demand for meat, soy production is only expected to increase.
Denmark imports a staggering 1.7 million tons of soy (2018), primarily in the form of soybean meal. Almost all of the soy imports are used as animal feed for pigs. According to a Forests of the World report (2020), less than a third of this soy in 2018 was compliant with the FEFAC Soy Sourcing Guidelines (SSGs), the “absolute minimum benchmark for responsible soy sourcing”.
Unfair and unsustainable trade deals between the EU and Latin American countries, like Brazil and Argentina, also replicate the imbalance of power between Global North and Global South countries. Certification schemes also present their own problems.
-----
Gry Bossen, the political coordinator of Forests of the World (Verdens Skove), will join us on May 16th to talk about the harms of soy production and contextualize it by presenting soy consumption figures in Europe and in Denmark. Gry will also discuss some of the practicalities of EU-Latin American trade deals (e.g. EU-Mercosur), and how they perpetuate an unsustainable global commodity food chain.
There will be the opportunity for a Q&A session afterwards, and hopefully, a fruitful discussion about how to move forward.
-----
ABOUT GRY:
Gry Bossen is the volunteer, campaign, and political coordinator at Forests of the World (Verdens Skove). She has a Master's in both biology and anthropology. Gry has worked in climate and climate policy for the past 7 years. https://www.verdensskove.org/

ABOUT THE SOY SERIES PROJECT:
The Soy Series Project is part of the Our Food Our Future Denmark initiative. Its aims are 1) to connect environmental and social harms of soybean production to food justice, 2) to contextualize the problem of soybean production & consumption within Europe and Denmark, and 3) to create a space for dialogue and political action.
The series will touch on topics including:
- Soybean production/consumption trends
- Destruction of the rainforest and consequent biodiversity loss
- Land grabbing & displacement of indigenous peoples
- Threatening of small farmers in Latin America
- Global capitalism and post-colonialism
- Vegetarianism / veganism
- Animal feed within a circular economy
- Standards (e.g. fair trade, organic, etc.)
- The Roundtable on Responsible Soy (RTRS)