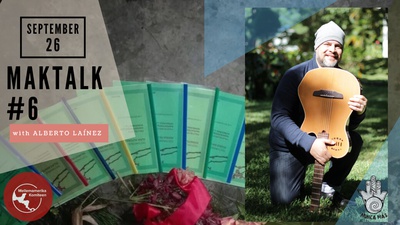 MAKTALK #6 Environmental activism and humans' rights in Honduras through music

Mellemamerika Komiteen and Nunca Más invite you to a cozy evening in great company, come and meet Honduran musician and human rights activist Alberto Lainez and enjoy his music and personal experiences!

It is time for the 6th and last MAKTALKS, and what better way to end a success than with music and humans’ rights activism?

Alberto Laínez is an environmental engineer and musician from Honduras, who started out as one of the lead musicians in the locally very popular band Sol Caracol. For the last 10 years he has dedicated his music to topics such as empowerment and strength of especially environmental issues and marginal people in some sort of political struggle under the umbrella El Proyecto Aullador (Project Howling/Howler). In this capacity he is regularly touring in Central America and Mexico. Alberto was part of the Nunca Más' project "Connecting Indigenous People in Honduras with Citizens in Denmark through Songs", dealing with Lencas in La Paz, Honduras. The Lencas is the largest indigenous group in Honduras with an estimated population of 450,000. The initiative built on a separate project co-operation aimed to through psychological methods help Lenca activists deal with the different types of stress and repression that affect them negatively as well as the historical memory. Important factors often ignored in the struggle for just societies. Alberto Laínez acts also as an ambassador for Nunca Más.

The event is free of charge, drinks, beers, and snacks can be bought in the bar.

We hope to see you there!

What is MAKTALKS?
With MAKTALKS the Central American Comitee (Mellemamerika Komiteen) invite different specialists from Central America to share their views and experiences on democratic and human rights issues. MAKTALKS is an initiative that seeks to open space for important and often overseen problematics and make such information available to a Danish based audience.